I've been focusing on my finishing my thesis for the past week, so this week, I'll be talking more about the application of my thesis research on the project. This thesis project emphasizes the idea of telling a story by integrating cultural elements into environment art without the presence of a character. The inspiration comes from a Gnomon workshop that discussed how environment becomes the second most important character next to the protagonist. Following the presentation, I began to explore a way to implement them into my workflow.

Narrative themes can be defined as what the work says about the subject. Classical paintings and literature are often the best at capturing these narrative themes as they have a specific context needs to be interpreted. In this case, the narrative theme comes from the fact that the Balinese people are known for their devotional art towards their religious beliefs. Devotion is often portrayed as praying towards God in fine art paintings.

One common characteristic highlighted in each painting is that there is a figure higher than eye level with a light source coming from above. The environment concept art is developed using this simple rule as a basic guideline. 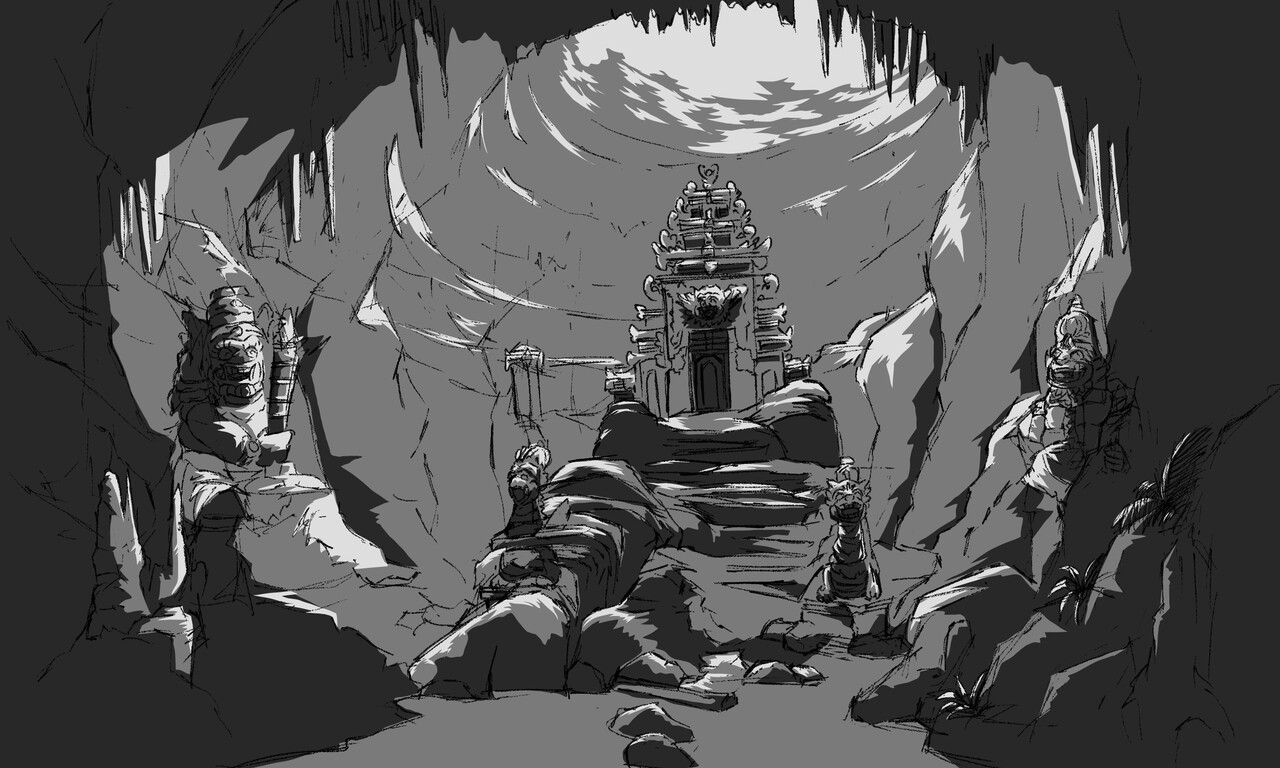 2. Psychology of Colors in Practice

Color has a deep psychological effect that can fill a scene with a certain emotion and tension to create a compelling atmosphere. Teal and orange for example, is a commonly used complementary color scheme. Depending on its context, orange can be interpreted as warm or exotic while teal can be interpreted as cold or calming. The Balinese believe that art must be infused with life, which means that every aspect of art, including colors, must be derived from nature. In the color theory, nature is often represented by green. Therefore, I’ve decided to use green as the focal point for the color in the environment.

3. Layers of History in Practice

In the talk, Josh Lynch and Brian Recktenwald mentioned about finding storytelling elements through references. History can often be defined as the surface details on the material or the story behind the objects. Details like scratches, scorches, moss, and dust are added to show the authenticity of the asset, demonstrating how the materials age over time. In this case, the environment consists of a natural open space area which means that it is vulnerable to weathering. Therefore, a layer of dust, moss, and overgrown plants should be visible in the scene. The added storytelling elements help implies the feeling of a quiet and abandoned space.

Brian Horton who directed Rise of the Tomb Raider (2013) mentioned the use of visual imagery for storytelling within the game environment. This form of history help describe the culture and the people who inhabited the space. Murals are often used to inform a culture since it is nearly impossible to reconstruct history into an environment art. Here is an example showing a classical Balinese rendering of the Sacred Monkey Forest depicted on the cave wall.

I guess this is it for this week's update, I'll talk more about the rest of my thesis application on the project in the next update. 'Till next time!